The other featured and anticipated aspect of Schmeckfest is the musical. Entirely comprised of community members, the annual musical is a chance for Freeman’s rich musical history to be showcased. Performances in the past have included Oklahoma!, Seven Brides for Seven Brothers, Hello, Dolly!, The Music Man, and Annie.

Schmeckfest is not just a fundraiser for Freeman Academy. It’s about fellowship, about community members collaborating to celebrate heritage, family, and a sense of belonging. Tour buses from around the country, college students taking a break from their studies, Freeman natives who have moved elsewhere, even those with no connection to the community are coming back year after year for this festival that had become about so much more than tasting.

The very first Schmeckfest began as a celebration of the 10th anniversary of the Freeman Junior College Women’s Auxiliary. A special meal was planned to involve the traditional dishes from each of the three Mennonite ethnic groups in the area- the Hutterish, Swiss, and Low Germans. It was decided that the name of the event would reflect the variety of foods: Schmeckfest, or “festival of tasting.” The ladies of the auxiliary planned on 200 people. In the spring of 1959, over a thousand people showed up for the first Schmeckfest.

In the decades since then, Schmeckfest has evolved to make it into the tradition we see today. In 1960, it was lengthened to 2 days in order to feed the demand for meal tickets. The response was so overwhelming year after year that in 1973, Schmeckfest became a 3-day event. Still, the celebration continued to grow. In 2005, the decision was made to make Schmeckfest extend over 2 consecutive weekends in March or April. 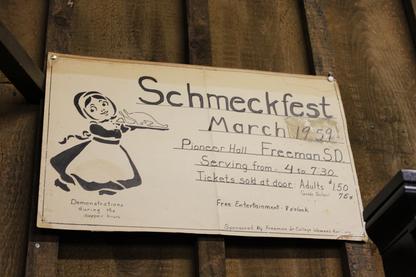